Today’s snippet o’ smut is from the first book in my Dominant Cord series – One Gold Heart. 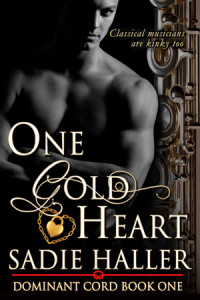 It was still dark when Finn woke to a hand snaking its way down his torso. He grabbed it before it reached his navel. He reached over and switched on the light. “It’s the middle of the night. What’s going on, love?”

“I was thinking about earlier, when I called red.”

“I let that bastard win tonight. He made me scared of sex, and that fear deprived me of an orgasm or three. I don’t want him to have that kind of power over me any more.”

“What do you want to do about it?”

“Aw, fuck. I want three orgasms, no pain, and I want to be able to have a normal sex life.”

Finn was conflicted. He so desperately wanted to agree, but he didn’t want this to end up making things worse for her. Caution won out. “I don’t know about this, love. I think we should hold off for a bit to give you more time to get used to the idea.”

“No. I’ve been thinking about it for hours. You said all you’ll ever ask me to do is try, and I want to try.”

“Okay. If you’re sure, we can try, but you have to promise to call red if you are even a little bit uncomfortable.”

“Good. Just like a scene, I’m going to give you the details up front. No surprises, I promise.”

“Fair enough. One more choice before we begin. Do you want to put the condom on, or shall I?”

“I don’t know whether to thank that birdie, or give all his shoes to Gounod.”

Finn chuckled. “Okay, love, one last thing before you put my condom on. Are you wet, or do we need lube?”

“Believe it or not, I’m totally wet.”

“Show me.” Mac flushed, but dipped a finger inside and held it in front of him. He opened his mouth and she slipped her wet finger in. Finn moaned as he sucked her finger clean before releasing it. She was killing him. “Honey, I sure like the taste of things to come. Condom, please.”

Mac opened the packet and removed the condom before kneeling beside Finn. She rolled it onto his cock and winked, looking pleased with herself when she was done. “There.”

“Good girl. Whenever you’re ready.” She shifted so she had one knee either side of Finn’s body. It took all his concentration to stay perfectly still while he watched Mac struggle with her task “Colour, Mac?”

“Okay. Not a standard response, but we’ll go with it. We’re on your time, baby. No hurry.”

“Alrighty, then.” Finn watched Mac briefly close her eyes before reaching down and grasping the base of his cock. She held it steady as she positioned herself so the tip was touching her entrance. “Colour?”