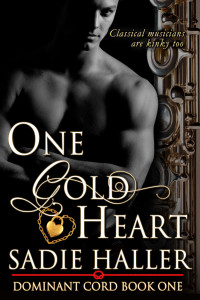 Deadlines are looming large. One look at my calendar and it’s panic stations. Love is…, the Romance Divas 40 author short story anthology is releasing on August 5, 2014 (go have a look at the Facebook Page for more information). My contribution features Mac and Finn from One Gold Heart, Dominant Cord Book 1.  I’ll be heading to the other side of the world to spend time with my family around the same time, so Dominant Cord 2 and 3 need to be finished by the time I leave.

The cover for Dominant Cord 3 is almost ready. I can hardly wait to show it off.

For the entire month of August, Sadie’s Sunday Snippet o’ Smut will feature authors from the Love is… anthology. Stay tuned for more.

It’s time to head off to the writing cave and get some of this crazy off my plate. In the meantime, I’ll leave you with a little teaser from One Gold Knot, Dominant Cord, Book 2.

Scene Set-up
Shortly after meeting piano teacher, Hildy Klein, at a wake, Wilson, clarinetist for Dominant Cord, makes a serious error in judgement. He turns to their mutual friend, Sully, for advice. The following conversation takes place after Hildy accuses Sully of tutoring Wilson on how best to win her over.
[blockquote align=center]

Sully chuckled. “Of course I did, and I’m not sorry. I gave Finn help when it came to Mac, so it was only fair I gave Wil a little guidance on navigating the maze that is Hildy Klein.”

“You are nothing but a hopeless romantic. How about you stop trying to make matches for your friends and work a little harder on one for yourself. It’s time you stop being a man-slut and settle down with a nice little switch.”

“You didn’t say anything to Wilson about my occasional side-trips to the ouchy end of the hitty-stick, did you?”

“Of course not. Nobody’s business but yours. I’m sorry I let that bit about the ball-gag slip out last night.”

“Ah, the truth comes out. You’re drowning in guilt for almost outing me. I thought your forgiveness was a little too easily won. A word of warning, sweetie, you’ll need to be on your guard with Wil over your little slip. He brought it up with me today, so he’s not going to let it go.”

“You know, Sully, if you’d just come clean with the group, neither of us would have to watch our mouths. What’s the big deal?”

“Dominant Cord. That doesn’t exactly scream four Doms and a switch, does it?”

Hildy let out a long, exasperated breath. “You are such an idiot. You said it yourself, occasional trips. That doesn’t make you less of a Dom. What’s with the identity crisis?”

“I don’t know. Maybe it’s because I haven’t played in weeks, and these broken ribs make me feel less-than.”

“Whiner. Hurry up and get healed so you can pick up a hitty-stick and strike terror in the backsides of subbies everywhere.”

“Are you sure you’re not kinky?”